So many things have happened this year, even if only in my mind ;-), that I can't possibly summarize it into a few paragraphs. It's just beyond my ability. So maybe I'll just pick and choose. ;-)

While thinking about 2006 the first thoughts were that it was the Year of Giving Until It Hurts. I know I've expressed this idea in other posts throughout the year, but I don't have time to go back and link them at the moment. I let myself feel the emotions of self sacrifice (and even some resentment) while recalling all the times I gave until it hurt. Then I was so overcome, to the point of tears, with the realization that I am so extremely Blessed in this life that the whole meaning of The Year of Giving Until It Hurts was transformed into something else, something Divine*. It wasn't only my giving. I've received so much that I have no right or privilege to complain about anything when it comes to my family life. And I am so very thankful for all of my Blessings. It is pleasantly humbling (like a "good hurt") to realize the magnitude of it.

So while I might feel like a doormat in some respects I also now know that I've got to be a really large, durable, and probably comforting doormat to be able to handle all the trampling of this past year. ;-) Perhaps I'm flirting with a Job kind of moment right now in that it's better to be thankful for all the good things in life instead of focusing on what was lost, taken away, or not given at all.

I'm still waiting to squeeze those lemons. ;-) But the tree is blooming again! (sorry for the poor quality photo) 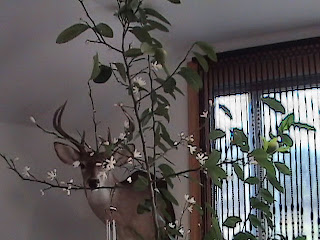 And this time there are at least four times as many flowers (many not visible in that photo). Since there are no bees or other bugs I don't know if there will be fruit from these blooms. If the tree self-pollinates maybe there will be. It apparently doesn't get enough light right now to fully ripen the fruit already on it. Well even so, I think I'll ring in the New Year with a glass of premature lemonade. What better way to celebrate this passing year and all of it's sweet and sour moments? After all, even though I hated the poster my college roommate hung on our wall I guess it convinced me anyway that when life gives you lemons, even half-ripe lemons, make the best of it and make lemonade!

Therefore encourage one another and build up one another, just as you also are doing. But we request of you, brethren, that you appreciate those who diligently labor among you, and have charge over you in the Lord and give you instruction; and that you esteem them very highly in love because of their work. Live in peace with one another. We urge you, brethren, admonish the unruly, encourage the fainthearted, help the weak, be patient with everyone. See that no one repays another with evil for evil, but always seek after that which is good for one another and for all people. Rejoice always; pray without ceasing; in everything give thanks...

And that is this year's final Sunday Sermonette. Happy New Year!


---------------------------
* I'm truly sorry for those who cannot experience the Divine in that way. I think that part of the reason why some people refuse to acknowledge the Divine is because it is a kind of painful experience. It does hurt a little at first (just like some other things), but the feeling changes to a kind of rapture (just like some other things). Some people fear that initial pain so much that they won't even approach it. Well, as they say, what you don't know can't hurt you. But they also say, you never know until you try. Let me tell you, the more humble you are the less it hurts to be put in your place.
Posted by Rae Ann at 3:53 PM

Happy New Year! It's been fun being a "blog-buddy" with the illustrious Rae Ann and I'm sure 2007 will continue this fine tradition.