The Cruel Tutelage of Vi Mo 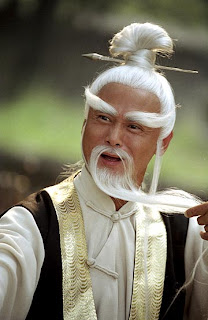 In case you don't know, the title is a play on the chapter of Kill Bill Vol. 2 called "The Cruel Tutelage of Pai Mei". Get it? Vi(cious) Mo(mma). ;-) And if I was a guy and could grow a beard I'd have a long one like his.


Sometimes my methods of enlightenment are a bit too similar to Pai Mei's, but most wise students know that their most difficult teachers are usually the best and most effective. And learning the most valuable lessons should involve some challenge and struggle. One shouldn't expect it to be easy to learn great and powerful things. Wise students should also, instead of getting angry and offended by a tough teacher, be honored and grateful that the teacher is even bothering with them. And you can be certain that a tough teacher has learned that toughness from her own hard lessons and hard teachers.

Well, of course, this is fantasyland, but if I was a Kung Fu expert you can be sure that I'd be just like Pai Mei. I could kick your ass without moving much more than a finger. You wouldn't know what hit you.

Maybe I'm just in an ass-kicking mood and the only way to express it is through these encoded words pounded into the make-believe realm of cyberspace, and since none of that is really real then it shouldn't matter what I say or do. It's all fake and secret (incomprehensible to me) codes anyway, unlike a firm kick to the ass that would leave a very real and unmistakable bruise.
Posted by Rae Ann at 4:17 PM