This week has been pretty eventful so far, and my dad is back in the hospital for a few days. I don't have time to give all the details at the moment but will come back to that when I do have time. Good thoughts and prayers are always appreciated. Thanks.
Posted by Rae Ann at 4:16 PM 2 comments:

I Can See Clearly Now

I can see clearly now, the rain is gone,
I can see all obstacles in my way
Gone are the dark clouds that had me blind
It’s gonna be a bright (bright), bright (bright)
Sun-shiny day

"I Can See Clearly Now" by Johnny Nash

Happy Easter Sunday, the most holy of the Christian holidays. Easter is early this year, and our weather has been pretty cold but pleasant enough. We had some egg hunts at my dad's house this afternoon. He's not doing as well as he was, mostly because the stupid doctor on Friday told him he was "worse off" than a week ago. You'd think by now they would understand the powerful psychological consequences of their words on their patients. Well, whether we acknowledge it or not our minds and psychology are quite powerful and influential in our fates.

24 Although Thomas the Twin was one of the twelve disciples, he wasn't with the others when Jesus appeared to them.

25 So they told him, "We have seen the Lord!" But Thomas said, "First, I must see the nail scars in his hands and touch them with my finger. I must put my hand where the spear went into his side. I won't believe unless I do this!"

26 A week later the disciples were together again. This time, Thomas was with them. Jesus came in while the doors were still locked and stood in the middle of the group. He greeted his disciples

27 and said to Thomas, "Put your finger here and look at my hands! Put your hand into my side. Stop doubting and have faith!"

29 Jesus said, "Thomas, do you have faith because you have seen me? The people who have faith in me without seeing me are the ones who are really blessed!"

Resurrection is psychologically pleasing. And I really cannot see or find any totally convincing argument against the possibility that our consciousness lives on after the physical body dies. Believe me, I have looked and many people have tried to tell me over the years.

Free will is inherent in humans. It is one of the traits that separates us from the "lower" animals. We determine (or limit) our destiny by our choices. I hope I don't really need to list examples to prove my point. This is a basic fact.

If one chooses to reject an afterlife he is essentially committing spiritual suicide. As a conscious entity, the mind determines whether or not it goes on. If the mind has convinced itself that physical death is the end of its existence, then it will be. This is completely consistent with the Christian idea of accepting, or not, that Jesus's teachings are the true path to God and His (our) Heavenly home (afterlife for our consciousness/mind/soul) somewhere in the whole of the Universe (other than the dimensions we know in physical life). Hell is permanent separation from God, and if the consciousness stops itself at physical death then that's definitely a permanent separation from God, or in other words, spiritual suicide.

Now let me switch over to my shamanic mode for a minute. One of the main jobs of the shaman in a community is to help people prepare for death. Nearly all societies have had some kind of rituals to help people move from one "world" to the next. This is the aspect of shamanism that I have been most uncomfortable about, yet as I look back at my adult life it is one of the most prevalent. Death has been a frequent presence in my adult life. My life situation has always worked out so that I was available to attend to the needs of my aging and dying grandparents. And my mother, and now my father.

I think I've always kind of intuitively known that this was my "purpose," though it has taken many years for me to "fine tune" my understanding (and acceptance) of it. So now, I'm facing the reality of dying and death yet again, and I must use any wisdom gained from all the cumulative experiences to help my dad prepare for the afterlife.

Okay, so in additional to attending to his physical needs during this process I will offer the spiritual support and encouragement that might ease his fear and anxiety about the bodily demise and the soul's movement beyond. I know that he is a believer and that his choice has been made.

Well, I've lost steam for a big finale here. Maybe I'll think of something to add later. Anyway, that is this Easter Sunday's sermonette.

I considered taking a page out of Lee Smolin's playbook and naming this sermonette something very pretentious and academic-sounding like "Resurrection and the Proof of God" (not quite a GUT but almost a TOE). ;-) I mean, now surely, mustn't I be at least as smart (or funny, maybe) as he is? ;-) But my spunky mood faded.
Posted by Rae Ann at 7:17 PM No comments:

Thanks to everyone who has offered comments, prayers, and encouragement. Over the last few days my dad seems to be gaining strength each day. His mood and breathing are improving too. He is about halfway through the radiation regime, and tomorrow morning we will get a report from the doctor on how the treatments are working so far. It certainly looks to my untrained eye that something is working. Actually, I feel fairly strongly that my dad will get somewhat better in the next few weeks, as long as the chemo doesn't weaken him too much. His next chemo is on Monday, but he did not have one this week. And I'm pretty sure that's why he's feeling more energetic now.

Happy Spring.
Posted by Rae Ann at 4:42 PM No comments:

Sorry for the long silence. It's been a busy time and I just haven't felt up to saying much here. My dad is getting radiation treatments daily for the next two weeks and chemo once a week. After the radiation they will probably increase the chemo but we are keeping options open. Right now, the chemo is a low dose of Taxol and Carboplatin. On Friday this week they will do a CT scan to see if the tumor is responding to the treatments. Well, 'needless to say' (I'm violating my personal aversion to and prohibition of that phrase) it's very difficult to see my dad so ill. It's especially hard for David because he and my dad are very close and it's been less than a year since his dad died. Sometimes life punches us in the nuts.
Posted by Rae Ann at 9:06 AM 3 comments:

Sorry to have to say it, but my dad does have lung cancer. We don't know yet the prognosis, etc, but he will begin radiation treatments next week sometime. Well, we all are pretty devastated even though we kind of knew this would probably happen at some point since he smoked all his adult life. I can't get angry at him for smoking because I understand that times and the world were much different when his habit was entrenched. And he did drastically reduce it in recent years.

I feel a bit numb right now, though moments of emotion break through. It recalls the sadness and disappointment of my mother's and grandmother's illnesses over a decade ago. Knowing that we all face these things in life doesn't make it any easier when it happens.

Thanks for your thoughts and prayers.
Posted by Rae Ann at 9:51 AM 2 comments:

Dear friends, please, if you ever pray or somehow meditate for better things, my family needs good thoughts sent our way. My dad is in the hospital again with more pneumonia. He just got out of the hospital a couple of weeks ago after a week's stay for pneumonia in his left lung. It seems he went home a little too soon, and now it has spread to his right lung and he has broken a rib from coughing so much. There is some concern about a tumor since he has smoked all his adult life, and they are doing a procedure today to look inside his lungs and take biopsies and cultures if necessary. Sorry for the less than happy news, and thanks for any prayers and good thoughts you can spare.
Posted by Rae Ann at 9:17 AM 1 comment:

After my appendectomy and I was laid up in the hospital and in recovery at home last year I got into watching Project Runway on Bravo, the network I've always thought of as the gay man's channel. ;-) At the hospital the channel selection was very limited and most of the shows on daytime TV are really awful. But Project Runway really caught my attention because it is a very well-produced "reality" show and because I've always been interested in sewing and have dabbled in designing, especially skating costumes.

It was nearing the end of the season 3 when I started watching, and I like the way that Bravo frequently repeats its popular shows so that you can catch up on what you've missed. I've seen all of season 4, some episodes many times because it is so interesting, though not all in sequence. The best things are the focus on creative projects and not so much on the interpersonal dramas among the designers. There is a little of that, but it's by far not the focus and purpose of the program. The real meat of the show is the creative process.

Almost all the men on the show are gay which is quite entertaining. Gay men can be so hilarious. And there are many various gay male personalities. If I was a 21 year old gay boy I would probably be a lot like Christian. He's a spunky, cocky little androgenous guy who reminds me a bit of myself when I was a spunky, cocky little college girl who wasn't afraid to be myself whether I annoyed people or not. ;-) But if I was any other gay man I'd really love Rami. He's one of those men that we women say "God, what a waste!" about him being gay. He's pretty hot (masculine for a queer) and a very talented designer too. Actually, after viewing the final collections online I think that he should probably win.

Another kind of odd coincidence about the show is that one of the big sponsors is L'Oreal Cosmetics which I used to work for in my pre-vicious momma days. I was only a lowly part time sales rep/merchandiser, but it was a great job that I really enjoyed. We got lots of perks even as part timers.

Ten years ago I was designing and sewing a skating costume for a routine to the music of Madame Butterfly. But oops, I got pregnant with my daughter and didn't ever get to finish it or wear it for competition/exhibition. I still have it in its incomplete form: 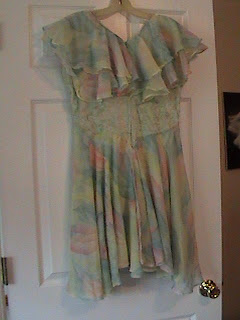 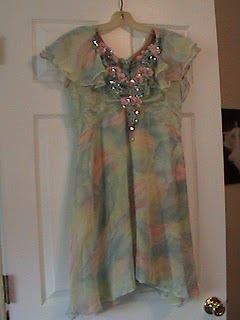 Well, I've never been a slave to fashion or an especially stylish dresser and I really don't keep up with all the latest big designers and so on. But I have always enjoyed sewing and creating cute things. My mother was a great seamstress and sewing is a way for me to feel closer to her spirit. I think she would have really enjoyed watching Project Runway too.
Posted by Rae Ann at 10:54 AM No comments: