I want to remind you of your proper place in this nation. I recommend you read the Federalist Papers, specifically #57. For your convenience I'm including a very important excerpt from that paper:

I will add, as a fifth circumstance in the situation of the House of Representatives, restraining them from oppressive measures, that they can make no law which will not have its full operation on themselves and their friends, as well as on the great mass of the society. This has always been deemed one of the strongest bonds by which human policy can connect the rulers and the people together. It creates between them that communion of interests and sympathy of sentiments, of which few governments have furnished examples; but without which every government degenerates into tyranny. If it be asked, what is to restrain the House of Representatives from making legal discriminations in favor of themselves and a particular class of the society? I answer: the genius of the whole system; the nature of just and constitutional laws; and above all, the vigilant and manly spirit which actuates the people of America, a spirit which nourishes freedom, and in return is nourished by it. If this spirit shall ever be so far debased as to tolerate a law not obligatory on the legislature, as well as on the people, the people will be prepared to tolerate any thing but liberty. Such will be the relation between the House of Representatives and their constituents. Duty, gratitude, interest, ambition itself, are the chords by which they will be bound to fidelity and sympathy with the great mass of the people.

In my own "vigilant and manly spirit" I am stating that unfortunately the "genius of the system" has been undermined by itself and its members doing all of the things that Hamilton/Madison said it shouldn't do, and also by the people tolerating everything but liberty. (a problem that may soon be remedied by sufficient "populist outrage")

As some are fretting about the sanctity of the "rule of law" I am just saying that the law has fallen by its own excess. The rule of law is only as strong, trustworthy, and incorruptible as its makers. I am standing in a separate place from many of the people with whom I normally agree about the fundamental principles of government... some who want to believe that the rule of law should be respected unconditionally. However, be it by the virtue of my rebellious heredity or some other influence, I cannot agree that the rule of law is always untouchable and inviolate.

As for the whole AIG issue, I do believe that all of you Representatives (and Senators) should apply the same punishments upon yourselves as you wish to apply to the employees who received unjust bonuses, etc. You are just as guilty as any of them, if not moreso.

The "populist outrage" is not restricted to, or even primarily directed at, some unfortunate and incompetent financial services employees of AIG, and you would be wise to recognize your own corruption and incompetence and to rectify yourselves immediately.

With much vigilant and manly ;-) spirit,
Vicious Momma

PS Another reminder for you, Article 1, Section 9 or the US Constitution: No Bill of Attainder or ex post facto Law shall be passed.
Posted by Rae Ann at 5:45 PM 1 comment:

I Can't Believe It's Not Butter

Take 30 seconds to watch this commercial featuring the Buttertons. The giant globs of the "nutritious" butter substitute all over the modern food looks almost as excessive as the butter sticks on the retro food. Sorry, but that ad is promoting just as bad 'overconsumption' of their product as they are trying to parody. Maybe it's just me, but I would fire that advertising agency. ;-)
Posted by Rae Ann at 5:40 PM 1 comment:

This 1934 painting amuses me somehow: 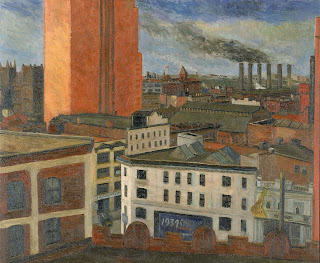 Courtesy of Smithsonian American Art Museum which is opening a new exhibit of Depression Era Art in order to capitalize on the "Great Recession" as they call our current economic conditions. Kind of clever, I guess.

So you have this state-sponsored artwork that shows the messy consequences of "progress" and productivity and growth. Well, you have to use energy to actually make things happen so it seems a natural thing for Tofel to paint and "honor" the factories as an important part of the scene. I'm pretty sure that a state-sponsored "Great Recession" artist would not be allowed to promote such politically incorrect things as smoke stacks. ;-)
Posted by Rae Ann at 9:21 PM No comments:

I've heard that you are having a lot of trouble finding people to work with/for you. While I have strong reservations and questions about you and your methods I would like to offer my services to the Treasury because I'm sure that I could bring some valuable and effective contributions to the work at hand. I am not an attorney nor an economist nor an accountant by official title or degrees, but I have many years of experience in the real life administration of a successful small business. And my salary/compensation requirements are quite reasonable... I would do the job for the cost of just one of Nancy Pelosi's private military jet trips home from DC. And it would be nice to get all the usual basic government employee benefits too.

I do have to say one other thing. My offer to work for the Treasury is null and void if it requires any kind permanent mark on my person that would indicate an allegiance to anyone or anything other than the United States Constitution and my God-given conscience. I hope that won't be an obstacle to your consideration.

PS I don't have any unresolved tax issues and plan to file on time this year.
Posted by Rae Ann at 4:59 PM 2 comments:

For What It's Worth

A classic anti-establishment song that is today just as applicable, or maybe even moreso, than it was in the late 1960s.