Melting Ice and What To Do About It

Watch the following video and then use your brain to think of ways how to see this as a good thing:


Assuming that Greenland's ice really is melting as these "scientists" tell us, why must they always take a negative view of it? The way I see it, all that melting ice is a blessing and not a curse or disaster. How? Well, there are many places on this planet that desperately need fresh water. Why doesn't someone start harnessing this emerging source of fresh water? Couldn't water trade become the "new oil"? Couldn't some enterprising people begin to collect, store, and transport that water to the places that really need it? Wouldn't that solve several problems at once?

And another thing. Why doesn't someone harness the hydro-power of all that flowing water? I don't necessarily mean building dams because it would be problematic to build permanent structures on a quickly changing terrain. Why not construct mobile hydro-power units that can be moved when needed or dismantled and moved? Or maybe something similar to an oil-drilling platform that is used in the ocean? It seems that there are so many opportunities to approach the melting Greenland ice as an emerging resource instead of an imminent disaster.

I think the biggest problem is that so many people are either too stupid or too blind to see opportunities when they are literally flooding over them. I've often wondered, why can't the "climate crisis" alarmists who insist that mankind's activities are destroying the planet see that if mankind can destroy then mankind can also create and adapt? But really, I do not believe that mankind's activities are "destroying" the planet. Sure, mankind's activities do affect our environment. That is a basic "law" of evolution. But why is it so hard for those people to see that trying to preserve a very narrow set of conditions only inhibits evolution and progress instead of helping it?

Well, I don't really expect answers to these questions, but it would be really nice if some people would start considering how to use changes as stimuli for progress instead of whining and moaning about things changing and trying to "stop" it, which is completely useless and will be unsuccessful anyway. Change is the nature of life. Period.

We wouldn't even be here if our ancestors looked upon every change they encountered as a thing to fight against or to stop. What did they do? They looked at the changes and figured out how to deal with them and how to use them to their benefit.
Posted by Rae Ann at 1:15 PM 1 comment:

Sometimes being a packrat is rewarding. I've finally been unpacking some boxes from when we moved into our house seven years ago, and what treasures I've rediscovered!

Back in the pre-momma days we liked to go rock and fossil hunting. The local area has many places where fossils are easily found if you know where to look. I had completely forgotten about this particular kind that we'd found at least 15 years ago. 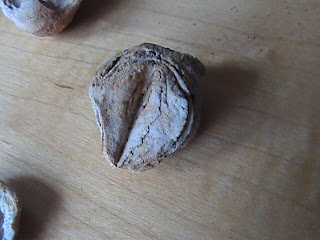 My best guess for its identity is some kind of Stromatoporoid, but a Google search for "vulva-like fossil" doesn't yield much. You'd think such a curious thing would be a big Google hit, or at least I would think that. ;-)

Well, if any geologists or other experts know for certain what this fossil is then please do leave a comment to let me know. Thanks!

Oh, and isn't Nature fascinating? Who would have thought that the vulva form could be hundreds of millions of years old? ;-) And the shaman in me wants to think that this fossil is a very powerful talisman...
Posted by Rae Ann at 4:26 PM 1 comment: 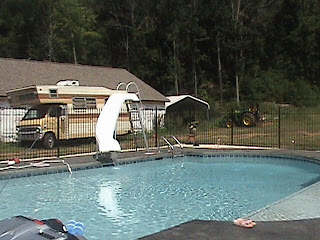 Fifty Hoe Points for the person who identifies the most Redneck Icons in the above photo. ;-)

Well, it really is like Heaven on Earth for me to have this pool in the backyard. The other night I went skinny dipping in it for the first time, and wow, it was so sensual. It was the first time I've been totally comfortable swimming nude, probably since it was in my own pool and there were no worries about getting 'caught.' Besides it's very dark without the lights and no one would have seen me anyway.

After swimming daily for a couple of weeks I'm even feeling more fit. Maybe not looking more fit yet, but that's not my main concern. Hey, I wonder if we could get a tax deduction for building an Employee Fitness Facility? I am on the payroll after all. I bet big corporations get to deduct their fitness facilities. And the pool cost about a third more than our total taxes last year. It seems fair to be able to deduct the difference from this year's taxes, but we all know the taxes aren't quite fair. I might have to look into that anyway. ;-)

It seems pertinent for me to point out that getting to this Heaven has taken a long time. Good things come to those who wait, and all that. Even Snoop Dogg knows that taking it slow is a very effective way of building appreciation and excitement (though there is such a thing as too slow):

Sorry, now I seem to have lost my closing thoughts. Maybe I just need to go skinny dipping again. ;-)
Posted by Rae Ann at 9:22 PM 3 comments:

The title comes from Czech President Vaclav Klaus's book about how the "green" movement and global warming alarmism is threatening the freedom of everyone. Apparently, the English translation of the book is currently out of stock, but nonetheless, let's talk about it anyway.

I'm not longer a "global warming skeptic" but now claim the title of "climate realist" because there is no question in my mind that the planet's climate is fine and will continue to be fine regardless of what mankind does. The only thing at risk is the freedom of people to live in the ways they prefer. If I can afford to pay $5 or $6 per gallon of gas to drive my kids and their friends around in my SUV, then I certainly should be free to do so without having to suffer some ridiculous stigma about "damaging" the climate with my "carbon footprint." Sorry to all the treehuggers and other green psychos who don't understand that at least here in America, we are still supposed to be allowed "life, liberty, and the pursuit of happiness." If my pursuit of happiness means driving a big vehicle full of kids to school and other activities, then who's to say that I'm wrong or evil?

Hey, if people want to drive motorized roller-skates around that's fine by me, but just don't go around telling me that I have to do it too. And don't go around calling me evil and other bad names just because I don't want to drive a motorized roller-skate. And if I want to burn all the lights in my house all day long and pay the electric bill for it, then who are you to tell me that I'm killing the planet? Freedom allows us some self-interest and other people must realize that their freedom does not cross the line of my freedom. If I can afford to pay the price for "excessive" use of something, then that's my business and no one else's (except the seller of that something).

I once read something by a very communistic totalitarian type of person that said he thought it would be a good idea to limit the whole world's fertility rate, i.e. limit the number of children everyone can have, and to let the poor women of the world "sell" their birth rights (to have babies) to women in wealthy countries who want more kids than they are "allowed". This was supposed to be a way to control population growth in the world because he thinks that overpopulation is the root of all the "climate changes" and "resource scarcity" and also a way to "redistribute wealth" around the world. Well, let's think about it a moment. If it's okay for someone to sell her fertility and for someone else to buy it, then how is it bad or wrong for someone to be able to buy more fuel and energy than they are "allowed"? Well, obviously, there is no real difference and the communistic totalitarian (meaning limiting freedoms) arguments fall apart easily.

Green used to be one of my favorite colors, but now it's being hijacked by a bunch of rabid vegetarians* and communists. There is even a new TV network, Planet Green. Well, that's fine and maybe it will have some good things on it, but let's not allow "greenness" to become the new reversed McCarthyism in which those who don't fit the "green" expectations of others are targeted as criminals and their lives ruined.

Just the other night I was watching a "green" show about alternative energy sources. It had some very interesting new developments, especially in solar power. They are developing much smaller and more efficient solar collecting "film" that is flexible and could be used in many applications that older panels can't. Well, this is certainly an exciting idea and one that should definitely be promoted. One application they talked about was embedding these in roofing materials, and when it's time to replace my roof I would be interested in such a product if it's available and not prohibitively expensive. I think it's great when the "greens" put their money and effort where their mouths are by actually working on solutions and improvements instead of dictating how everyone else should live. And that's how freedom should work.