Update 2-19-07: Just noting an interesting 'predictive' occurrence. Not long after this post, banking and its shady practices became a big news story. Well, make of it what you will, but this kind of thing happens to me often, just not always so quickly and in such big, obvious ways. And the really funny thing to me in looking back at this post is how especially well the title fits with these new developments. ;-)

I just have to rant a little about this stupid global warming crap with which groups like Greenpeace are polluting the world. Directly from their website (their bold emphasis):

We're seeing the effects of global warming all around us - more intense heat waves that disproportionately affect the elderly and poor, more severe storms that wreak havoc on our homes and communities, and all kinds of changing cycles in the natural world.

That's why it's unacceptable for the U.S. government and oil companies like ExxonMobil to continue to fuel global warming while refusing to support solutions to the problem. Fortunately, a clean energy revolution is sweeping across the country-we have the tools to put the Earth back in balance, and we can do it today.

Is that first paragraph not an obvious bunch of inflammatory lies meant to frighten and upset people? They should be sued for wrongful anxiety or something. And wow, "changing cycles in the natural world"? Since when did the cycles in the natural world not change? The Earth has never been a utopian paradise in some ideal "balance". That it was and that we in the last 100 years have ruined it is the biggest and dumbest and falsest myth of the whole global warming pile of bullcrap.

Now let me say one thing. I don't have a problem with a "clean energy revolution" as long as it doesn't involve some kind of communistic, socialistic, totalitarian regime imposed on unwilling people. I can't trust Greenpeace to follow those criteria because we all know that they don't respect the rights of anyone who disagrees with them. They clearly don't approve of choice unless the choices are the ones they have offered.

And why is ExxonMobil the only scapegoat bad guy here? It's one of the biggest publicly traded companies in the world, number 6 according to this Forbes list. What too many people don't stop to think about is that if you hurt a large publicly owned company you are hurting everyone. Well, it's just like global warming, right? ;-)

Let me go off on a little tangent here about the top five on that list.

Banking and Insurance. Yeah. Like those are pristine industries that do nothing to harm and exploit the poor and elderly and the environment. If I were a well-paid journalist I'd do a fancy, in-depth expose on those industries in comparison to ExxonMobil, and I suspect that the results would show that overall ExxonMobil is a choirboy in moral comparison to the evil that the banking and insurance companies do to all of us. But I'm not a well-paid anything. I'm just a random blogger, so sorry, I can't invest the time and energy on that project for free. I'm a capitalist at heart. ;-) 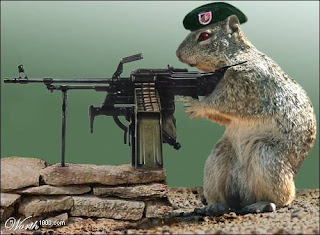 
It's easy to pick one company or person or thing to be a culprit, or boogeyman, that must be defeated. I sure hope that ExxonMobil isn't defeated by some squirrelly (by the way, I kind of hate squirrels) environmentalists. From what I've read they provide their employees with excellent benefits. On top of that imagine how much money is being earned by these people and how they in turn put that into the economy. Greenpeace and all the other people who vilify ExxonMobil need to realize that picking one company to blame imaginary problems on is just plain wrong.

Well, despite whatever those wackos say, the Earth is not out of "balance", and even if it was there is nothing that humans (or militant environmentalist squirrels with guns) could do to change it.
Posted by Rae Ann at 12:56 PM

Really, when one gets right down to it, there are credible scientists aligned on either side. It baffles me, though, how either side can say what things were like 100 or 1000 or 10000 or 1 million years ago. Who was measuring the polar icecaps in 1900? Who was measuring ocean levels in 500 BC? Yet politicians grab hold of this and the MSM plays along and, if we're not careful we're signers of the Kyoto Accord (isn't that a car?) and at a competitive economic disadvantage to just about everybody else in the world.

it's kind of weird with everybody talking about global warming etc, I recently mentioned innocently we're overrating our impact. It's not that we force nature to get along with us, but we have to see how we get along with nature. Now everybody thinks I'm out to destroy our environment or something (me who I get upset if somebody leaves the room without switching off the light).

One way or the other, I think one should disentangle the very real energy problems from the global warming issue.

Maybe all that catastrophe painting is just a cheap way to scare people, instead of projecting the future of children they might not even have?

dh, it can be very confusing and contradictory. But at the most basic level I think it's really kind of stupid to think of the climate in "global" terms at all. It's just another way of the wackos trying to create a "united" and communistic world. It's just part of that "one world government" garbage if you extend it to its logical conclusion.

Bee, I agree with you about us learning to get along with Nature instead of trying to change Nature. It's kind of like our geothermal energy discussion on your blog. I'd consider myself a "reasonable conservationist" in that I do think we all should try not to waste resources too much and to learn to live within the means of our local environments. Creating some kind of "global" regulations seems contradictory to allowing people to learn how to live in their local conditions. And then there's that matter of freedom. It's probably easier to keep things running smoothly when you limit everyone's freedom, but I just can't stomach that line of thought...

As long as you protect your ignorance you are free to have any opinion you want. If, on the other hand, you were actually to go to the trouble of finding out exactly what was learned about times past and how it was learned, you would suffer a double penalty: first you would be forced to think, and second, you might find out that your opinion is wrong.

Better for your peace of mind to make the choice of Galileo's bishop, and refuse to look through the telescope for fear of learning something that shakes your faith.

On the other hand, as George Bush is finding out, reality usually manages to get in the last word.

CIP, I think you are a little overblown in your comment. Perhaps DH knows the processes that have been used to guess at those figures, and perhaps he knows that they are just that- guesses. Even "educated" guesses are wrong sometimes as you are so fond of saying about string theory. ;-) Some of us laypeople don't cloak ourselves in ignorance, but wear coats of healthy skepticism. So how is our skepticism any less valid than yours? Sorry, dh, to butt in on a comment directed at you.

coincidentally, I read just yesterday an article by a psychologist who found that people who are confronted with thoughts about their own mortality, death, catastrophies tend to the politically conservative side. A technique that has been used repeatedly in election ads etc.

Fatal Attraction: A New Study Suggests a Relationship Between
Fear of Death and Political Preferences

That's an interesting article. It could be a valid experiment or it could have been designed to get the result they were looking for. Social sciences have to be especially careful about their experimental designs and such because it's so much easier to affect the outcome than in the hard sciences. I'm not accusing them of that though. The more liberal side is also guilty of using emotional appeals over rationality. It's very interesting. Thanks for tellling me about it!

I think most people in the real world are not caught up in worries about global warming.

The science community is stampeding toward a conclusion and the latest IPCC report probably made it worse.

I run a site devoted to letting famous scientists write and I can't get anyone reputable to write against global warming because they don't want the threats and to be the villain in every newspaper article for the next year.

The science community is stampeding toward a conclusion and the latest IPCC report probably made it worse.

This is awful! Is that peer pressure replacing censorship - where will that lead us.